I rode 2500km to get here and I think that my new friends Jesus and his son Diego made the whole trip worth it.

I wanted to get a picture of the beer can and in doing so accidentially dropped the beast again. Luckily a truck came along within minutes and the owner helped me lift the thing.

Looking into the abyss and tring not to fall in. I'm sure that it would be a few lung fulls of screaming before you'd settle down and enjoy the scenery


The road heading down into Batoplias was literally cut into the mountain side.

I found a great pull off to have a whiz at. Meanwhile I decided to take a picture of the kind of roads that I've been driving.

I was really looking forward to hiking into the 40 Casa's just out side of Madera. Arriving at the gate there was a small community of Cabins. I was flagged into someones yard just before the gates were opened into the site and invited to breakfast. Here I met Jesus and his son Diego. Jesus was a great outdoor cook and was up staying at the family cabin for a week with his son Diego.
After Breakfast I asked Jesus and Diego if they wanted to be my guide and they hoppe don their bicycles and lead me into the parking lot at the trail head. From here we descended into a deep gorge and then up the other side where we could have a first hand look at some of the restored 1300 yr old structures at the Curenta Casa's.


Jesus and Diego chillin in the shade after the 2km hike which was pretty much all down hill, across a small bridge, and then all up hill......repeat in reverse direction.

After the hike in Jesus offered me one last supper, and cooked up some Burritos that had mixed potato's, onion's, peppers, hamburger, and tomatoe's with authentic mexican spice and cheese....it was deliciosos!


Lets look at that again...gettin hungry??


Just outside of Madera these log cabins were advertised as the Hostal on the lake. Stopped in and decided to stay the night and listen to the crickets.
As I was kinda in the middle of nowhere and overheard one of the two guys mentioning that my wallet was full of money after haggling over the price I slept with a knife open and ready this time.
I don't know if I'm paranoid now or just prepared?...Where is the fine line?

The scenery and the mountain road into Batoplias was a dangerous a mix. Several times I looked down into the abyss below and noticed that my knees were litterally shaking enough to slap the tank.
The 60 km ride in was roughly 2 hours long and began with new asphalt which eventually became rough dirt road. I had to depressurize the tires to ensure adequate control along the road as there was alot of loose gravel and big rocks that were just waiting to take advantage of my spindly legs and arms in a struggle to take down the bike.

A Torro keeping a lazy eye on me as I photographed the valley, little did he know that he'd be the best shot of the bunch.

The last Bridge crossing before Batoplias. Along the road into this village there were numerous beer cans strewn all over the dirt road for about 30km. I had met the rowdy fellows at the top of the canyon and to say hello they decided that one of the ten guys piled into the back of the ford F 150 pick up would fire a couple of rounds off with his shot gun. Since the armed robbery I'm much more aware of my surroundings and upon entering the Canyon I was thinking to myself that this scene was unnervingly familiar. I read later that any traveller into this region should be weary as the military recently raized all the maurianna plants and thus crushed the economy in the valley. Subsequently kidnappings and hostage takings have been more common, however tourists are not commonly targeted.

Robert and Madalin from Sweden just starting out their ride south on a BMW GS 1200. Of all the places I'd meet someone it was here in Batoplias, in a gorge deeper than the Grand Canyon..... called the "Copper Canyon"

Old colorful buildings made up most of Batoplias' village.
As a matter of fact Batoplias was the second town after Mexico city to recieve electricity


Meandering the street at 7:00am. Due to a time change I could'nt figure out why all the places to eat were closed.

A Heron taking a rest in the mist just before night fall in a Mexican tourist town. 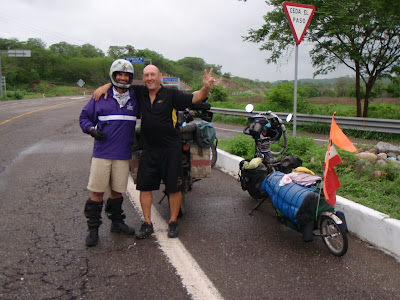 Ian (in Blue)and Alain with the bicycle. Ian is just starting out his ride south as well I met the both of them on ruta 200 heading north as they were heading south. Alain has been riding for a long time and once rode through NB which I was appauled to hear was the only place thus far in his travels that he was assulted by drivers who tossed garbage out windows at him. Come off it ... NB!


I've covered quite a bit of ground since my last post in Puerto Vallarta and I'm currently situated in Chihuahua.
Since Puerto Vallarta I began heading north and stopped into a once trendy tourist town that John Wayne and Jack Kerouac used to enjoy called Mazatlan. I strolled the historical old town and meandered my way through the deserted streets enjoying the colonial ambience, but alas, its rainy season and noone was out and everything was closed so I headed back to my hotel for a chilly nights sleep in the powerfully airconditioned room.

In the morning I headed inland for the first time in a long time and headed up ruta 45 to Durango which is touted to be Mexico's most scenic drive. Indeed it was scenic, with epic vista's and beautiful pine treed mountains. Today was the first time in ages that I smelled pine trees and it was a scent that let me know that I was getting closer to home and fly fishing.

toques on moto
Set to embark on a ride through America, Central America, and South America and take in the ups and downs of the road. The chosen bike is the Iconic Kawasaki KLR 650, fully customized for a 60,000 km Trip. The anticipated destination is Tierra Del Fuego Chile. Julie will be my co-pilot for the first 3 months and barring all mechanical problems I shall plan a return trip by land, sea or air. 2009-2013 © Toquesonmoto. All rights reserved.