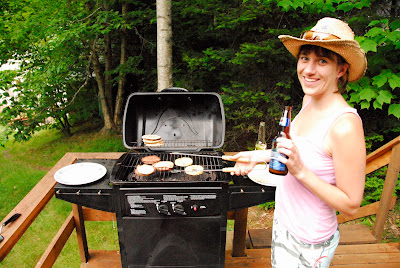 Julie, my co-pilot, looking after the BBQ, all the more reason to be home. 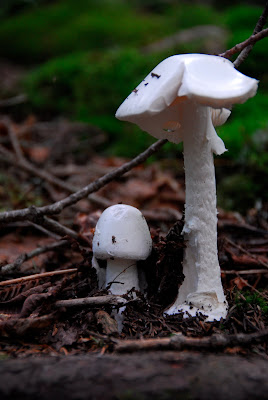 Pretty but poisonous, A couple of mushrooms found out in the Fundy National Forest. 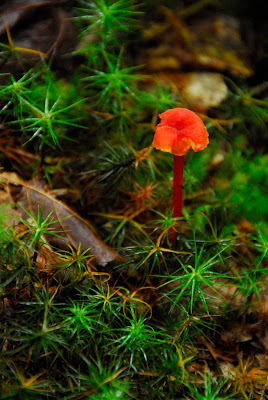 In contrast to the white fruiting bodies above, here we see a bright red fun-guy, "Fungus" among the bryophytes better known as sphagnum moss. 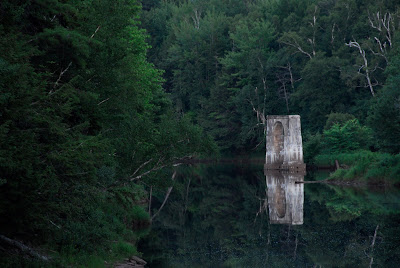 The Cocagne river nearby to where I live, In the scene you see the old bridge pillar. 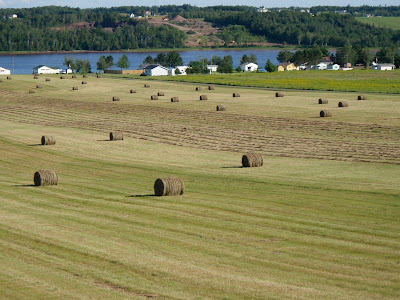 The fields out in Bouctouche New Brunswick.
It has now been slightly over a month since I have been home and I feel that I'm just now settling into the groove again.... or rut, however you chose to view the "work, eat, sleep routine".
Since arriving at home I have sort of become a bit of a recluse creature rarely wandering far from my house and not speaking to very many people. On the way home from a little motorcycle ride the other day I noticed the next door neighbor unpacking his car with a bunch of fly fishing rods and equipment. I pulled over to chat and we both realized we'd been living next to one another for 4 years and have never met. I don't have a cell phone, nor am I a member of face page, so, he can't text me, which I guess means we'll never hang out.
As I am "broke.com" at the end of the trip, I have not been partaking in a lot of adventurous activities other than cycling, and hiking in order to whip my aching body back into shape. In total the entire trip ended up being 61,230 km over 245 days, 17 countries, and 38 border crossings which gobbled up all but 2 pages in my passport and my entire life saving plus a little more. As for the bike the following numbers speak for themselves.
I used:
7 rear tires
4 front tires
3 sets of chain and sprockets (I'm still running the 3rd set)
1 fork seal and wiper
1 arc welder (SMAW) to fix my rack
1 tube of 5 minute epoxy
1 tube of silicon
1 tube of Shoe goo
1 package of JB Weld
haywire for odd fixes
10 cans of chain lube 20 bucks a can $200 bones
1 dismantle of my rear shock for maintenance
1 hose clamp to replace the old corroded one on rad hose.
2 rear tubes to repair the 2 flat tires I had in the rear
4 spark plugs
1 valve shim
12 oil changes (30 litres)
90 litres of oil total (because KLR's burn oil) roughly $800 dollars worth!
4575 litres of gasoline at roughly 80 cents a litre $3700 dollars
various nuts and bolts that I robbed from my kit from time to time 6mm metric NF
1 tent lost to bandito
1 thermarest lost to bandito
1 walmart leatherman given as a gift
Roughly 15-150 dollars a day depending on what you do ie. swing in a hammock or SCUBA dive.
In the 5 times that I took the bike out for a spin after returning home the following things have happened:
I blew a headlight bulb
Speedometer cable broke
Ram mount for GPS broke
So I guess I should add these to the list of required spares that I needed to replace. Its funny that the bike waited until I got home for the GPS mount and the Speedo cable to break as those two parts are simply unavailable in most places in the world outside of the US or Canada.
Posted by toques on moto at 10:08 AM

toques on moto
Set to embark on a ride through America, Central America, and South America and take in the ups and downs of the road. The chosen bike is the Iconic Kawasaki KLR 650, fully customized for a 60,000 km Trip. The anticipated destination is Tierra Del Fuego Chile. Julie will be my co-pilot for the first 3 months and barring all mechanical problems I shall plan a return trip by land, sea or air. 2009-2013 © Toquesonmoto. All rights reserved.